In honor of the Nets moving to Brooklyn, I am in the process of putting together a list of the Top 25 basketball players of all-time from Brooklyn.

Before you start coming up with names, here’s the criteria:

The player had to either live in Brooklyn and/or play high school basketball in Brooklyn (for 2 years).

If you were born in Brooklyn and moved away like Michael Jordan and Carmelo Anthony, you are not eligible.

The top 25 list will be based on their overall career. Not just what they did in grammar school, AAU, high school or the schoolyards. I’m not looking for a guy who was a park legend. We’ll leave that to Slam Magazine.

We’re looking for the top players over the long haul from the greatest city in the world!

Congratulations to the New York Rangers as they move on in the NHL playoffs with their 2-1 win over the Ottawa Senators last night taking the series, 4-3.

As a kid, I wasn’t much of a hockey fan but I had friends that played it and loved it.

I recall the roller hockey games over at the 9th street bandshell and from time-to-time and you’d see kids playing on the streets of Windsor Terrace.

When I think of the Rangers the following things come to mind:

The late Drew Thomas; a fine man who was a passionate Rangers fan.

I have been notified that Danny Green has passed away. Green will be remembered by his family and friends for all the good he did.

Danny was the house manager at the Knights of Columbus in the early 70’s and a steady customer at Farrell’s and a regular in the neighborhood.

Danny left Brooklyn in the 90’s and ended up in Dallas, Texas.

I have taken rides on a lot of busses around the city.

My mother started us very young; seemed like everywhere I was going MTA was the reliable way to go.

The 75 and 68 were probably the two most popular for me.

I came across a story on Michael Buscemi, brother of Steve, who has filmed a short movie about the ‘B61’. Click here for the Daily News review.

In his 14-minute film, long waits for the no-show bus give Vincent, the depressed middle-aged character Buscemi plays, time to make friends with a neighbor, Sal, played by actor Francesco Saviano.

“When you’re waiting for a bus or train, you have the opportunity to meet someone,” said Buscemi, who lives in the nabe and regularly rides the B61.

“The whole dynamic is so interesting.”

Vincent is as exasperated by the B61 — one of the city’s slowest, most crowded buses — as real-life riders.

I only took the 61 once; I went down to Visitation to play in a basketball game.

The bus sucked so much, we walked over to Smith and 9th and took the train home.

I have to come clean.

Up until a few weeks ago, I have never heard of the label, ‘hipster’.

Shoot, I even recall a football player from the University of Nebraska, I.M. Hipp.

This word hipster snuck up on me while reading a message board from a blog out of Brooklyn. (There are so many good Blogs, I don’t recall which one mentioned the hipsters.) But lately there’s been more and more usage of this name to describe someone from Park Slope, Williamsburg and even Windsor Terrace.

Back in the 80’s we used the word ‘yuppie’ when describing the Young, Urban, Professional.

I was guilty of calling people yuppie left and right.

Society tends to label certain groups. It’s human nature. But now in my 40’s, I can’t come to grips with calling someone a ‘hipster’.

Googling Hipster, I came across this description via Urban Dictionary.com

Hipsters are men and women typically in their 20’s and 30’s that value independent thinking, counter-culture, progressive politics, an appreciation of art, creativity, intelligence, and witty banter.

Hair styles that include combinations of messy shag cuts and asymmetric side-swept bangs. Such styles are often associated with the work of creative stylists at urban salons, and are usually too “edgy” for the culturally sheltered mainstream consumer.

I’m bald so none of the above pertains to me.

The “effortless cool” urban bohemian look of a hipster is exemplified in Urban Outfitters and American Apparel ads which cater towards the hipster demographic.

I’m definitely not effortlessly cool; I’m an energizer bunny, always on the go. But I do tend to try to act cool.  I don’t shop in either of those stores.

Hipsters tend to be well-educated and often have liberal arts degrees, or degrees in maths and sciences, which also require certain creative analytical thinking abilities.

After dropping out of high school I smartened up, passed the General Equivalency Exam – then went to college for 5 years and earned my degree.

The other day my wife and I were discussing this topic and she surprised me with:

I’m still trying to figure that one out.

One day when I was a young boy I was at my Great Grandmother’s house down on 14th street between 3rd and 4th avenues.

Everyone in our family called her ‘Mom’.

Everyone loved her, I think?

To be honest, I hated going there.

First off it was a hike. We had to walk all the way down from Windsor and 9th. (Nowadays as an adult who enjoys walking it doesn’t seem too far but when you’re a kid, it’s a journey!)

On occasion, if it was too late at night, say 7 or 8 o’clock we’d catch a cab up on 4th avenue for the trip home. (Remember how fast the cars on 4th avenue would drive? It was like watching the Indy 500)

Sad to say I didn’t have much of a relationship with Mom.  At the end of each visit, before leaving, my mother always made me kiss her good-bye. I tried to hide or run outside the house when I knew it was close to going home. I did my best to avoid Mom.

In Mom’s house I recall there was a candy dish on the coffee table, a breadbox in the kitchen and a giant stuffed turtle that someone had brought back from Korea.

There was a bird-cage with a parakeet or a parrot; it’s been so long I don’t remember exactly. But it was creepy.

Sitting on the couch one Friday afternoon, there was a soap opera on TV and my mother and mom were in the kitchen sitting at the table; I was bored out of my mind. Looking down at my sneakers I realized there was a hole on the bottom of one of them. The rubber had worn down and now you could see my white tube sock.

Friday’s always seemed like the day the adults were in a good mood. Not sure if it was because of the last work day of the week or maybe because it was pay-day. I asked my mother if we could go to 5th avenue and get new sneakers?

As a kid, I owned one pair, I did everything in them.

I would rock Pro-Keds, Converse Chuck Taylor’s or there was the time I wore a pair of ugly-looking yellow rejects. They didn’t even have a name! My mother had purchased them at the ‘Junk-Shop’ on the corner of 10th street and 5th avenue. (Do you remember Jerry?)

I used my only pair of sneakers to play baseball in the lot, football in the park, stickball in the schoolyard and of course basketball.  In the winter, when it snowed,  I used them as boots too. These days I see kids with multiple pairs of shoes.

That afternoon at Mom’s house I removed my shoe in the living room handing it to my mother who passed it off to my Great Grandfather whom everyone called ‘Pop’.

The hard-working, retired Ironworker took my sneaker down to the cellar where he had all sorts of tools spread out.

A few minutes later after inserting a piece of brown cardboard inside the sneaker and wrapping silver duct tape around it, it was good as new.

Pop handed me the shoe, had a few words of encouragement for me and I put it back on.

Walking around I felt like I had more cushion. It felt like I was walking on clouds. I even felt like I could run faster and jump higher…but just on one foot.

A couple of days later I was out in the boys schoolyard at Holy Name playing basketball. Late in the afternoon it started raining.  Back in the day we didn’t pack up and run for cover, we kept on playing. After a few trips up and down the court, I felt my sock getting soggy.

I glanced down and saw some of the brown cardboard slipping out of the hole which had now become bigger.

Standing off to the side of the court I reached down and tried to stuff the soggy cardboard back inside my shoe.

Ten minutes later, the tape started to rip and the cardboard slid out.

I was losing the battle.

Frustrated as hell, I finally ripped the cardboard out of the hole and continued to play.

These days I don’t think you will ever see a kid walking around with cardboard stuffed in their sneaker wrapped up with tape.

Wishing all the best for our guy Pat Fenton who is center-stage tonight!

Details on his show are below…

Our very own, Pat Fenton, an outstanding Journalist and Playwright is taking his show on the road.

This coming Thursday night, April 19th Pat will be reading from ‘Stoopdreamer and Other Brooklyn Stories‘.

The show gets under way at 7:30 PM at the Cell Theater in the heart of the Chelsea section of Manhattan. (338 West 23rd Street between 8th and 9th avenues) 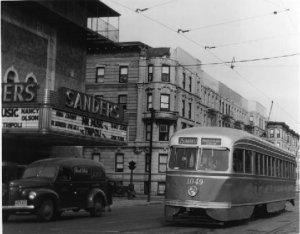 Among them a cop who really wanted to be a writer.

A movie projectionist whose life is defined by the continuance of movie reels as he waits for the changeover mark.

The 9th avenue pool hustler whose small piece of the American dream, two weeks summer vacation over a Rockaway Saloon, Fitzgerald’s, is dangerously gambled one night, and a beautiful dreamer named Janie Joyce who tried to go home again and almost made it.

Irish-American stories about an area that was once the hub of one of the greatest, Irish-working class neighborhoods in Brooklyn.

If you are looking for something to do Thursday night, head out and support one of our very own from the old neighborhood!

You can’t beat the price…It’s FREE!

Neighborhood native, Jimmy Rallis says the music being played in Prospect Park, across the street from his apartment is way too loud.  The former Fuller Place resident thinks something should be done.

Jimmy’s right, there should be a meeting with the residents to discuss this matter.

Thoughts and prayers go out to the Davis family.

Back in the day this wonderful family lived on Windsor Place between 7th  and 8th avenues.

Kay’s daughter Noreen was a great friend while we were teenagers growing up in the 1980’s.  Along with many others, we spent a lot of time together hanging out and having a ton of fun. Noreen was always happy and filled with positive spirit. Her smile could light up the sky!

Kay also had 3 other children; John, Collen and Theresa.

The Davis family was one of the best from the neighborhood! They don’t come any better!