This looks like a cool event…and get this, it’s free!

Where were you born and where did you grow up?

I’m a Bay Ridge girl, born and bred in Brooklyn. I was born at a hospital called Brooklyn Doctors which isn’t there anymore but I believe it was located at 45th Street and 15th Avenue. I grew up in Bay Ridge, on Gelston Avenue, and went to St. Patrick’s. For high school, I “escaped” Catholic school and attended Fort Hamilton, where I had great teachers who encouraged my love of writing. I was a shy kid who could write much better than I could talk and that’s how it all started. I’m also grateful to Mildred McVay, my third grade teacher at St. Pat’s, who instilled in me of a love of reading. (I thank her in the “Acknowledgements” section of THE EL.) I set a number of scenes in the book in places familiar to me growing up–a noteworthy accident takes place on the corner of Gelston, for example. 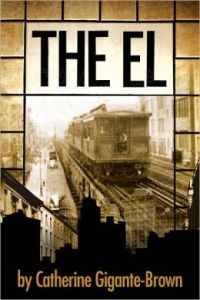 In Chapter 24, a scene in your book takes place in Farrell’s.  What was the reason for using Farrell’s?

I’ve lived in Windsor Terrace since 1994, just a couple of blocks away from Farrell’s. Even though I’m not much of a beer drinker, I’ve always loved the sense of camaraderie of Farrell’s. People celebrate there, mourn there, get jobs there…I’ve never seen another place like it. So, when I needed a place for a clandestine family pow-wow, the back tables of Farrell’s seemed perfect. The characters lived in Borough Park and in a sense, Farrell’s was a world away for them. Few people knew them there, so they could speak frankly, plot and bond. I even put Houlie into the scene (but changed his first name) even though he probably wasn’t even born yet. I wanted to pay homage to Farrell’s, to its spirit, and it seemed to fit perfectly into the plot. I hope it worked!

If you can sit down tonight and have dinner with any three people, who would they be and where would it be? (Don’t worry, you’re not picking up the check…)

I guess I should say something noble like Gandhi or Abraham Lincoln but I think I’ll be selfish and say my mom and dad Teresa and Francis Gigante, and my great-grandmother Marguerite Cirigliano who inspired the “Bridget” character in THE EL. Both of my parents have passed away (my dad almost 2 years ago and my mom 19 years ago) and I would love to have one last dinner where I could ask them things I didn’t and tell them things I should have. I’ve always wanted to meet my great-grandmother who died about 7 years before I was born. And dinner would be a home-cooked meal! To cook with Marguerite and my mom would be amazing, and to share all of the things women talk about when they cook together would be a gift.

Your three favorite books of all-time?

That’s a tough one. Let’s see. In no particular order: Hemingway’s The Old Man and the Sea, Gabriel Garcia Marquez’ 100 Years of Solitude and Pete Hamill’s Forever.

Are you working on a new book?

Yes, I am. The working title is “Society’s Child” and it’s set in 1979 Brooklyn, mostly the Sheepshead Bay area. It’s about a female drummer in the club-date business (aka “society music”)…you know, weddings, bar mitzvahs, etc…who’s trying to “make it” and get a recording contract. It’s very different than “The El,” written in journalistic style from the drummer’s POV, and also from the POVs of various people close to her. I’m a little more than halfway through. I wish I had more time to work on it. For “The El,” I took off six months and managed to write it. I’ve been working on my second novel a lot longer but I love being able to squirrel away any time I can to work on it. I love writing about Brooklyn and the colorful characters in it.

Cathy Gigante-Brown lives in Windsor Terrace and is the author of “The EL.”