From the third grade to the seventh, I played basketball for Holy Name.  When I was in the sixth grade I was on the Bantam ‘A’ boys team.  My coach was the late Joe “Fonz” Farrell.

On a cold Saturday morning in January we played a game out in Bay Ridge at OLA (Our Lady of Angels).  We met as a team up at the schoolyard and jumped in cars driven by the parents.  Car pooling was popular back in the day. 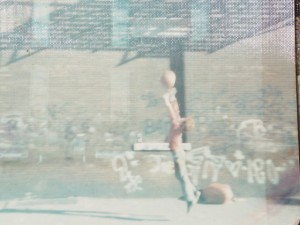 After the game, a HN win I might add, my teammate John Godfrey and I had two basketball games later in the day for Ty Cobbs.  The games were scheduled at New Utrecht High School.

We played for two different teams during the winter.  Danny Piselli, our former coach from the previous year at Holy Name had put together a team and played in the Utrecht League. Godfrey and I were a year younger than everyone else on the team.

Neither of us had any money for car fare.  At the RR train station, there was a cop standing at the token booth so we couldn’t rush the gate.

Godfrey and I had to walk to New Utrecht.

Keep in mind we were twelve years old and in the sixth grade.

OLA’s gym was on 73rd street and 4th avenue.

Utrecht’s gym was on 80th street and 16th avenue.

Not too far right?

It wasn’t so much the distance, or that we were so young, or the weather;  nope, it was our dedication to the game of basketball that we were willing to walk and not rely on a ride when, after the game at OLA we could have jumped back in someone’s car and returned home.

One nugget about New Utrecht; The front and rear views of the school building were shown in opening scenes of “Welcome Back Kotter,” which featured Utrecht alum Gabe Kaplan.  And, if you look close, in the closing credits, you see random shots of the streets of Brooklyn and a girl wearing a Ty Cobbs cheerleader jacket.