Been doing a lot of thinking as of late…

I’ve been in a “New York State of Mind” the last couple of days.

I want to get back in the New York Groove.

Thinking of moving back to the Big Apple; skyscrapers and everything.

The NCAA tournament is down to 12 teams. After tonight’s games we’ll have the Elite Eight. 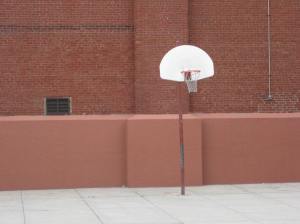 If you couldn’t play too well, they called you a “Non.”

If you couldn’t jump too well, they’d call you a “Rock.”

We had a lot of nons and a lot of rocks in the yard.

But, make no mistake, we had a lot of good ballplayers and a few guys that could get up!

I have seen a million “No Parking” signs in my life but this one is the best!

The start of another season in the Major Leagues is right around the corner. (Yankees fans are freaking out over Derek Jeter’s injury.)

Mets fans will be talking about their team in Farrell’s wondering whether they can do better than last season. Where’s Carmine when you need him? (Do you remember when he thought he was Tom Seaver?)

Young kids in the neighborhood are dusting off their gloves and pulling out their aluminum bats from the closet to get ready for their try-outs. (Do kids still use wooden bats? I had a black wooden bat that I bought from Sepe’s) 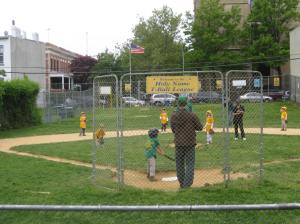 The Lot on 16th street will be open for business as many kids from the neighborhood will be playing hardball; some for the very first time.   As kids,  we spent so much time in that lot. We loved baseball. Today, I’m not so sure kids love it as much as we did.

At the age of 12, playing for Holy Name Bantam ‘B’ team I pitched for the late Joe Farrell.  Facing Gordy of St. Saviors was a nightmare. But facing him taught me courage, hard work and a never-give-up attitude.

Gordy threw smoke in the 6th grade! I mean he was the teenage Nolan Ryan.

Standing in the batters box over in the diamonds in Prospect Park, shaking like a leaf I struck out often against the flame-thrower.  But you know what, I kept working on my swing until the day I was able to make contact. It’s called “perseverance.” Nothing was given to you. You worked hard for a hit.

We spent hours on our stance and swing.

Two weeks ago I saw some highlights of a baseball game between Canada and Mexico.

It wasn’t the runs scored or the pitchers strikeouts that caught my attention. It was a fight. An all-out brawl between both squads after a player was hit by a pitch.

Whenever I see a brawl in baseball I think back to June of 1977.

On a warm sunny day down at the Parade Grounds, a huge fight broke out after a CYO baseball game between Holy Name and St. Finbar’s.

Holy Name was handling St. Finbar’s pretty easy on this day. The coach for the good guys was Joe Mussa; their team had only lost one game the entire season.  By the way, Mussa was my favorite teacher at H.N.S.

Seeing the fan from Holy Name getting attacked, a Holy Name player ran over to help to his friend. It’s what you did when you saw a friend getting beat up by a group.

A Finbar player wound up with a broken nose.

It was a mess.

Not too far from St. Finbar’s.

Only the opponent this day wasn’t Finbar’s, it was St. Bernadette.

During the course of the game over 100 kids were making their way from the Golf Course towards the baseball field.  They soon walked through the left field fence.

Standing in the outfield, they resembled the “Baseball Fury” from the film, “The Warriors.”

These guys weren’t there to watch the game. They were at the field for the big payback.

The rowdy group of teens began shouting at the lonely left fielder for Holy Name.

Next thing you know they are going after him.

The entire Holy Name team seeing this all took off to the outfield to try and help their teammate.

It was no use, Holy Name was outnumbered.

At one point, the rowdy group trapped Holy Name in the dugout. After the yelling and screaming, they began throwing things at the team.

“One guy took my cap so I went after him,” said Michael Slavin. The red-headed ninth avenue resident was a member of the team and within minutes was hit over the head with a baseball bat after retrieving his cap.

Slavin wasn’t about to let someone snatch his cap.

“I felt my left arm going crazy, then I blacked out.” He said.

Slavin was having a seizure.

An ambulance arrived and took him to Kings County hospital.

“I wasn’t hurt or anything. No pain, no headache.” Slavin admits.

Also in the melee, Gonzo was whacked over the head with a bat. Luckily he had a helmet on. As a memento of that day ‘G’ still has the cracked helmet.

After the x-rays Slavin was diagnosed with a depressed skull fracture. He spent three days in the hospital.

Upon his discharge from the hospital Slavin went up to Ford to clean out his locker at the end of the semester. Brother Sullivan walked by and expected Slavin to take his History final.

“Brother, I have a 100 percent in History and I just spent three days in the hospital. Do I really have to take it?” Slavin pleaded.

To this the teacher explained.

“Unless you want to attend summer school, yes, you have to take it.”

Slavin did as he was told and took the final. And being the outstanding student, Slavin aced it.

Thanks to my guy Frankie P. for this image. 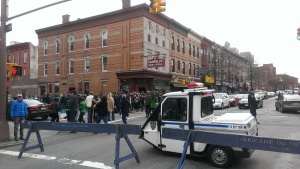 This is a great time of year if you are a basketball fan.

The NCAA tournament begins this Thursday. ESPN has a documentary running on the late Jim Valvano. It brings back so many memories for this basketball junkie.

Rewind to 1983; NCAA championship between NC State and the University of Houston.

It was a late Monday morning when I was walking across ninth avenue on my way to Pynn’s deli for a buttered roll and a coffee light and sweet.  Out of nowhere Joey Corrar stops me. The guy was like Whodini, he was everywhere!

“HEY FINAMORE, KEEP AN EYE ON VALVANO AND THE WOLFPACK TONIGHT!” He shouted to me the afternoon of the title game between the Wolfpack and the Cougars.

The Wolfpack won the National Championships.

I wanted to wish everyone a Happy St. Patrick’s Day!

Thinking back, I recall attending the St. Patrick’s day parade over in Manhattan.

We’d hop on the F- train early in the morning. I think we even skipped school?

There was about 25-30 of us to start but for some strange reason on the way back after a long day, there’d only be a handful of us remaining.

We always found a way to get separated.

Food and booze were a big part of the celebration. Green beer and green pizza! I recently saw where Dunkin’ Donuts is serving green coffee. I’ll pass on that one. 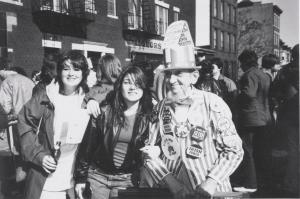 As for the celebration in the neighborhood, there was the Irish-American day parade. It was always a great day. I recall standing alongside the parade route and watching everyone walk by.

I never had the opportunity to join the marchers. Not really sure if I had any interest to tell you the truth.  I have the image of Tom Cuite majority leader of the city council as the Grand Marshal and always seeing Joe Ferris waving to us as he walked by. “Look, he does like me!”

The parade would start at the circle and head down 15th street making a right turn on 7th avenue. (Or was it 8th avenue?) I’m not sure how far it went but I do know that it turned back up and came along the parkside all the way back to the circle.

As teenagers we’d sit on the wall or the benches cheering the bagpipes.

Weren’t they the best?

As I got older, they became my alarm clock earlier that morning as some of them parked in the girls schoolyard and practiced right out on the avenue, outside my apartment. Thanks a lot guys…

I always thought they looked silly in their kilts at the time but when I look back, and I have matured – I think they look great in them! If Mel Gibson can wear one, so can I.

HAPPY ST. PATRICK’S DAY TO ALL!

Enjoy the day and drink responsibly.

Thanks to Rob Langton for the image. 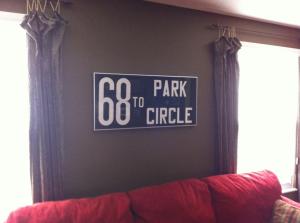 The New York Post on Detective Michael Cleary who is retiring from the police force….

“It’s a good neighborhood to live and grow up in, to raise a family in,” he told The Post in a walk-along during his last shift.

“You walk the beat, you get to know the people in the area, you build a lot of trust.”

I want to wish Mike the best of luck.

Just imagine if we had more people like him, how much better this world would be?

While walking along the street, do kids jump up and touch street signs anymore?

As a teen, I recall doing that all the time around the neighborhood.

Whether it was a ‘No Parking’ sign on a street lamppost or a store awning on ninth avenue, we were always jumping up trying to touch things. We always had a competition; to see who could jump the highest. Some kids got up higher than others.

My vertical wasn’t that high but I was always trying to jump as high as possible to hit something.