Throw-Back Thursday is a pretty popular theme on social media. People like to post old school pictures and apply the tag, #TBT. Here at Container Diaries, it’s always “throw-back” day. You know that!

This morning while sipping some hot coffee and reading the newspaper I thought of one of my favorite people of all-time.

It wasn’t often that you shared your thoughts about someone, especially publicly. Unless you didn’t like someone, you made it clear to them.

This guy I am about to write about didn’t live in the neighborhood but he was close. Third street between 7th and 8th avenues to be exact.

St.Saviour’s guy. But we never held that against him. I almost went to Saviour’s. We lived on 10th street. 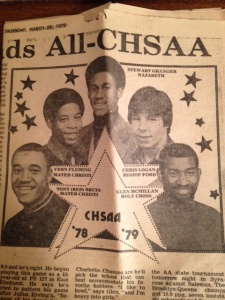 I am talking about Chris Logan. The guy that everyone called, “Tiffer” played basketball for Bishop Ford.  He was 6’8″ and one of the best players I recall watching during the 80’s.

He’s also one of my favorite people of all-time.

This guy is the salt of the earth. I mean it.

They don’t come any better. Matter of fact, they don’t make ’em like this anymore.

Two months ago on my visit back to Brooklyn I had the chance to catch up with Chris.

He has not changed.

He’s the same as he was back in the day.

I recall as a teen, the “lost days” as I like to call them I had just finished playing ball at East 5th street park. I must have been 16 or maybe 17? As I was about to exit the park and walk up the hill back to the neighborhood I heard someone shout;

I looked over my left shoulder and Chris Logan was getting into his car. I didn’t have my bike at the time so getting a lift up the hill was a welcomed thought. I just finished playing ball and I was dead-tired.

Without hesitating I walked towards the car and hopped in the front seat.

To be able to ride with Chris was an amazing opportunity. I had watched Chris play ball at Ford and now he was playing ball at Holy Cross College.

He was a guy a teenager could look up to; he was the perfect example of how to live your life. Great role model. Older guys don’t do that anymore.  It’s a “Me” society now.

He lived the right way too.

He cared about people. Still does to this day.

I never heard anyone say anything bad about the guy.

We rode up the hill and Chris stopped the car outside Bishop Ford. We parked on ninth avenue. Keep in mind it was the middle of the summer.  School was out. Somehow we got in the locked-down building and went straight to the gym.

I wasn’t sure why we were there. I lived a few blocks away, I felt like leaving and going home to sleep.

As we entered the hot gym Chris threw his car keys down on a plastic chair and like Houdini, he appeared with a basketball.  Chris got some shots up while I rebounded and made passes back to him for the next 30 minutes.

After some shooting we went into the weight room and lifted for 30 more minutes.

Chris had just finished playing ball at the park and now he was putting in extra work. It’s what the great players do. They do a little extra.  He was a D-1 college basketball player, not satisfied with his current state. He wanted to get better. I’m not sure if kids today subscribe to this theory?

The hour I spent with the guy everyone knows as “Tiffer” was 60 minutes that I treasured for the rest of my life. I never forgot what he did for this low self-esteem teenager. He lifted me up. That’s what the great ones do.

If the world had more Chris Logan’s, it would be a much better place.  Especially the game of basketball.

I recall a hot Saturday afternoon right around that time I rode my bike to Manhattan Beach and watched Chris play and his team stayed on the court all day.

The guy was and still is a winner.

Chris has a lovely family and is living in New Jersey. His son looks like he’s going to be some ball player.

9 thoughts on “THE BIG FELLA”