It’s just me and her. All our friends went home.

Each night I try to stay out as long as possible. I don’t want to go home.

Parkside, sitting on the wooden bench with my girlfriend. We’ve been going out with each other for a year.

Across the street from Lefrak. As I look up at the tall apartment building I wonder what it would be like to live there. I love the balcony each apartment has; I’m sure it’s a great view. They even have a doorman in the lobby.

We usually end up like this on the weekends.

I love when we’re alone.

Just her and I, no one else.

Matter of fact, I look forward to the end of the night. Like I said, I like staying out late.

It’s cold but we’re sitting next to each. We call it, “body-heat.”

I can sit here on this bench all night long with her but I know she has to get home soon. And I hate it when she says, “I gotta go home.”

Her parents get mad when she stays out late. Especially if they know she’s with me. You guessed it, they don’t like me. Oh well, nothing I can do about that.

What I hear next shocks the shit out of me.

“I love you,” she whispers.

“I love you stupid,” she says again.

Without answering she gets up and starts to walk away.

“Where you going?” I ask as she heads into the park.

I get up, jump up on the park wall and hop onto the grass climbing up over the hill.

About twenty yards up on Hippie Hill I catch up to her and wrap my arms around her, we kiss.

Now I feel like I am on top of the world. What more can I ask for? She’s a great kisser.

Her arms wrapped around my neck, my arms around her slim waist. When we kiss, she closes her eyes, I keep mine open.

After what seemed like an hour, we break the kiss. It’s always me that breaks the kiss too. First time I kissed her, I had no idea what I was doing.

No one ever taught me how to kiss.

She looks into my eyes.

“I love you,” she says once again.

Like an idiot I don’t know what to say.

She’s never told me that she loves me.

I go to kiss her, she pulls away.

Shit, I have no idea what to say.

I think to myself, I think I love her?

“Do you respect me?” she asks.

She starts to walk down Hippie Hill towards the path which leads to the monument.

“Where you going?” I shout.

Her pace picks up as she crosses the circle towards 16th street.

I follow her and catch up right outside the Parkhill restaurant.

“Let go,” she cries as she smacks my hand away.

She breaks away, crosses 16th street on her way towards Windsor Place.

I stop walking after her.

She hangs a right down Windsor Place.

I look over at Farrell’s and see a few guys through the front window drinking at the bar.

Should I chase after her?

Better yet, I should tell her I love her too.

Before I do, I walk across ninth avenue. An empty bus zooms by and the driver honks his horn. I open the front door at Farrell’s and shout, “KNICKS WIN TONIGHT?”

Duffer is behind the stick.

Damn it they suck.

I close the door and head home.

People, places and things…in our neighborhood, they all change at one time or another.

Some move away and unfortunately some pass away.

Out-of-towners purchase the brownstones for sale.

I’d be remiss if I didn’t mention the old-timers that hang out on the corners reminiscing. (They still hang out, right?)

My friends, these are the tales from the streets of Windsor Terrace. 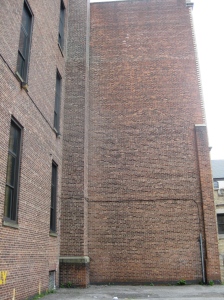 The streets where I once roamed.

Eighth, ninth and tenth avenues where I played stickball, whiffle ball, drank booze and listened to music on the street corners.

Streets where I knew everyone.

When the residents saw me coming I could just hear them, “Oh no, here comes the dysfunctional, red-headed kid from up on the avenue…”

Some people in the neighborhood liked me, some didn’t…I didn’t care. I still don’t.

I was a lost kid trying to find my way. Searching for guidance. Trying to read the map; the map for a young child to find his way and become a productive teenager. (Does such a map exist?)

I was without a plan. No blueprint in sight.

When I write, I begin to cry. But to be fair, I also smile at some of the shit I went through. The bottom line, I had no fuckin’ clue.

Funny thing is I thought I was the only kid in the neighborhood going through tough times. As a teenager I had no idea my best friends and many kids before me were going through the same shit; some had it worse. Life at home was awful. We all have a story to tell. We all stood in front of a disgruntled parent at one time or another wondering if we were going to get smacked in the face. As kids, we were defenseless.

We have readers that go as far back as the 50’s.

And of course we have the readers that hung out on Hippie Hill from the 60’s.

There were teens from the neighborhood way before me that went through the same shit as we did. A period of time where I was unaware of; The days of such street gangs like “The Jokers“, “The Tigers” and the “South Brooklyn Boys.” One person in particular is Bengie Powers. With the help of the Internet, I researched and found some material. Our very own, Pat Fenton, an amazing writer has also been a huge help; Pat has written some powerful material on the neighborhood from back in the day.

Here’s an article from Blaine Harden of the New York Times from back in 1999.

Patrick Fenton, then a gangly Irish kid with a pompadour and now a part-time writer and full-time court clerk at the State Supreme Court in Queens, remembered a drunken fight not so much for the punches as for its ending. ”We both threw up,” Mr. Fenton said.

Robert (Bengie) Powers, a former drug dealer and a former heroin addict and now an addiction counselor, said he never once won a fight unless three or four of ”you guys held somebody down and I could beat them.”

There is also a book coming out real soon on Bengie’s life. I am looking forward to reading it.  A book on Bengie’s life will be out at the end of this month. It’s called “Bobby’s Book.”  Pat is writing a piece about it for the Irish Echo, which I’m sure will be top-notch. Fenton’s a great story-teller and certified neighborhood historian.

Bruce Davidson published a photography book, “Brooklyn Gang” a book with many photos including Junior Rice.

The saddest story behind Mr. Davidson’s photographs is that of Howard (Junior) Rice and Cathy O’Neal, the gang couple whose cool and beauty were without compare. No one had the heart to tell their story on Saturday.

Junior was the Romeo of the street gang. He wore sunglasses everywhere and carried a copy of Allen Ginsberg’s ”Howl” in his back pocket. He had the pick of girls on Eighth Avenue and his pick was Cathy, a 13-year-old blond he thought looked like Brigitte Bardot.

Cathy, in the most famous of Mr. Davidson’s gang photographs, fusses with her long golden hair in the mirror of a Coney Island cigarette machine. She loved Junior and he loved her. Mr. Davidson photographed them embracing while lying on the sand underneath the Boardwalk. She became pregnant with his child before she was 15.

Mr. Rice, who is now 57 but whose Brooklyn friends still call him Junior, remembers that everything went wrong after Cathy became pregnant. ”We went to a judge and got permission to get married, which my parents weren’t happy about,” Mr. Rice said in an earlier interview. ”Our daughter passed away after 15 months, and I went into a self-destructive mode and so did she. We got divorced. There was a lot of shame.”

Mr. Rice said he took street fighting to ”the extreme,” using bats, chains and knives. ”I used to go out there and fight and I didn’t know what I was fighting about,” Mr. Rice said. He said he became a drug dealer, selling hundreds of thousands of dollars worth of heroin, and the ”profits went up my arm.” He had several failed marriages and is now divorced and unemployed.

We all know how big the World Wide Web has become.

But nothing beats a good old telephone call to an old friend.

A few days ago, basketball referee Nick Gaetani passed away.  I thought Nick was a good guy and a solid official.  He worked a ton of high school games and also spent time at the collegiate level. When I was attending John Jay and played a few games for their varsity team under Pete Coakley we played New Utrecht one Friday afternoon. While going up against them at their gym in Bensonhurst I became friends with one of their players.

It turned out to be Nick’s son Frankie.

After that game we played against each other all over Brooklyn in the summer time. East Fifth Street, Manhattan Beach and the Brighton Y.

When I received the news about Nick’s death, I decided to reach out to Frankie and send him my condolences.

Now mind you, we haven’t spoken in over thirty years.

Someone passed me Frankie’s number and we had a great conversation. We talked about the good old days of ballin’ in Brooklyn. It was amazing that he remembered me!

I know technology is great and all and has made communicating easy but you know what? Nothing beats a conversation over the phone. I still know my old phone number from when I lived on ninth avenue ST8-7307.

Sure e-mail and texting is easy and the thing to do but I miss dialing up old friends and chatting. 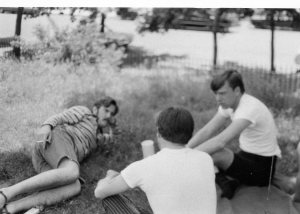 Doc O’Connor and Jo-Jo McDermott hanging out with ???