Before we played a game of stickball or softball, before we would choose up sides, what was the one thing the owner of the ball would scream out?

“CHIPS ON THE BALL!”

Playing a street game that included a rubber ball, if you happened to lose the ball you had to pay the owner to replace it. 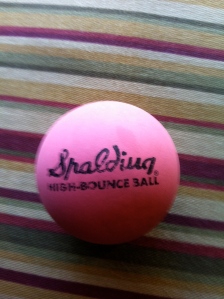 In the girls schoolyard playing stickball, if someone hit the Spaldeen over the roof on 9th avenue; pay me Reggie!

If you played baseball in the lot and out fouled off a pitch over the fence, game over.  Chip in for a new baseball!

Down at P.S. 154’s if someone “roofed” the softball you had to ante up. That is unless Joey Stasiak, Richie or Phillip Mullins were around to climb the roof and retrieve the ball.

To be honest though, I don’t ever recall anyone chipping in to buy a new ball.

Do kids still call, “chips on the ball?”

Let’s not forget the alert, smart aleck  kid prior to the game screaming out, “NO CHIPS!”