I love the history of sports.

Matter of fact, as a non-traditional, undergraduate student at Central Michigan University I scored a 3.5 GPA in my History of Sport class.

The history of basketball is closer to my heart; baseball and football come in at 2nd and 3rd.

Many people from our neighborhood played on the sports teams at John Jay High School located on 7th avenue.  Shoot, some readers of the blog went to the school when it was called, ‘Manuel Training’. 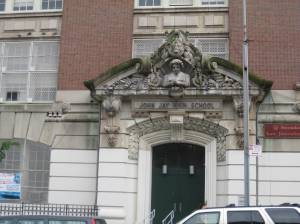 Back in the day John Jay students walked to school, caught the bus or hopped on the train. Some kids even pulled up in front of school in a Car Service!

The red-brick building with safety gates covering the windows is located smack dab in the middle of Park Slope, Brooklyn.  Across the street and up the block from the school you see multi-million-dollar brownstones, celebrity moms pushing expensive strollers and close by is one of the best elementary schools in New York City.

Over the years, John Jay was a school of last resort for transfer students or who were on the verge of dropping out.  It was also a school for students who were considered to be discipline problems and could not or did not get into other schools.

I spent a very short time at Jay. I actually had 2 different stints there.  But I did have some positive experiences during my tenure.  Jay was a tough environment, you had to pass through school security and metal detectors at the doors.  I had classmates from Bedford-Stuyvesant, Red Hook, Carroll Gardens, Cobble Hill, Boreum Hill, Sunset Park, Bed-Stuy and Brownsville.  There was distractions everywhere, hence the nickname, ‘Jungle Jay’. Despite troubled students roaming the halls and hanging on the street corners, the school also produced outstanding students.

The other day my buddy Carl Manco from Sport Prospect mentioned a former basketball player from Jay that went on to play at Fordham University. He called him  a “poor man’s Ernie Grunfeld”. What a great compliment. Knicks fans only remember Ernie towards the end of his career in a Knick uni but the Forest Hills graduate was a great player in college at Tennessee.

Actually, Carl and I discussed this sensational player weeks ago but his name somehow escaped us. You have to realize that Carl and I go way back when it comes to basketball but we were stumped. We reached out to as many people as possible to see if anyone remembered this player who was the main man at Jay during the 1970’s. No one remembered.

Matter of fact he was so good, he was the only player from Jay who was ever named 1st team all-city PSAL.

Thanks to Gerard Trapp for giving up the name or Carl and I would still be searching.

Kevin Fallon was the guy we were thinking of, with some extensive research, we found out he is the first cousin of comedian Jimmy Fallon. The hooping Fallon lived in Sunset Park but he was well-known around the schoolyards of Brooklyn.

When I think of basketball players of the past from the neighborhood who balled at Jay I think of Jackie Ryan, Patty Brynes, Michael Bundrick, John Corrar, Ron Hardy (East 5th street) and yours truly. Yes, this red-headed jump-shooting guard suited up for 7 games as a member of the varsity team.

I’d be remiss if I didn’t mention the coaches at Jay that were also memorable.  The football guys (John Boyle and Vincent Carbonaro) to Pete Coakley, our basketball coach. And of course, Coach Rizzo, who coached the Indians baseball team to the city championship in the early 80’s.

The past should never be forgotten, especially the positive past.

13 thoughts on “THE PRECIOUS PAST”