This is a revised blog entry from back when I started Container Diaries 32 months ago.

As a kid growing up on 9th avenue there were a few professional athletes who I admired. In baseball there was George Brett of the Kansas City Royals.  Phil Chenier of the Baltimore Bullets was my favorite basketball player, I even wore number 45 for the Bantam team. But the real people I admired were the older guys in the neighborhood. Guys like Gerard Trapp, Danny Pisselli, Alan Lang, and the late Vinny Brunton.

Trapp was a great basketball player, arguably the best to come out of our neighborhood.  Pisselli was an excellent coach (basketball, track, and baseball) Lang was a point guard in basketball who was exciting to watch and Brunton was a great guy that displayed nothing but class. Sadly, Brunton, a New York City firefighter passed away on Sept. 11, 2001 at the World Trade Center trying to save lives when terrorists struck the Twin Towers. 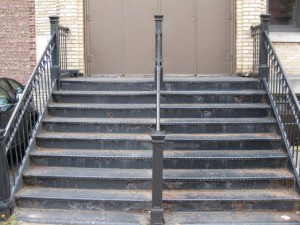 As a youngster, I wasn’t smart enough to learn from these four guys. As I got older, wiser and more educated, I think about them and the lessons they tried to teach.  I wish I was smart enough back then to listen to the older guys who took the time to give me advice.

Teenagers think they know it all. They seldom listen to their elders. Just like me, they think they can get it done their way. Not taking someone’s advice who has been successful is the biggest mistake you can make. Not listening to someone who has ‘been there and done that‘ can set you back in the game of life. (Isn’t there a piece of advice you received as a kid that wish you would’ve acted on?)

One of my biggest mistakes in life was not listening to Trapp, Pisselli, Lang and Brunton. Today, I think about what they tried to teach me when I was in my early teens. I put their advice to use as an adult and I’m glad I remembered their message.

Brett and Chenier couldn’t do anything for me that would’ve helped me later in life; sure they got me excited about sports but that can only take you so far.  People like Gerard, Danny, Alan and Vinny and many others from Windsor Terrace helped mold me into the person I am today.

The learning process is never-ending; whether you are 15 or 55.  The only way to succeed is through constant learning.